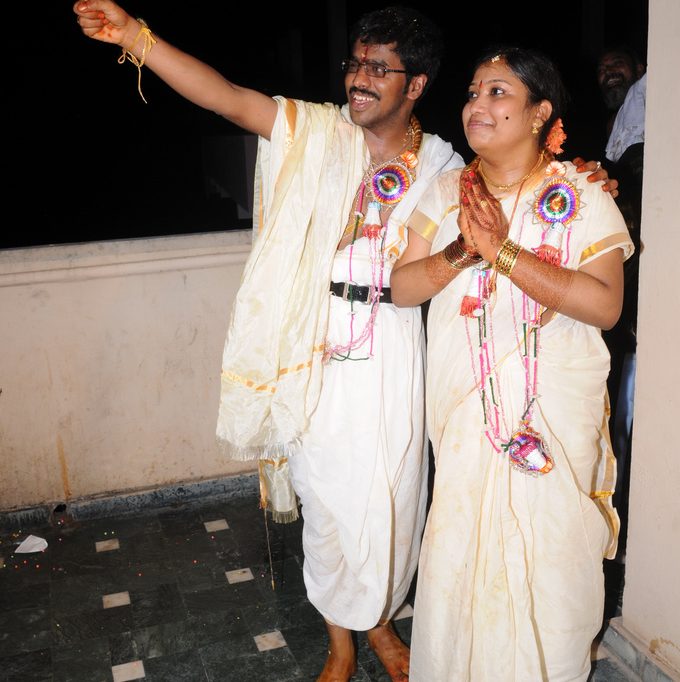 Today is aradhana of Shri. Kakarla Thyagarabrahman, a man who have created history in Carnatic Classical music. Tyagaraja and his contemporaries Syama Sastri and Muthuswami Dikshitar were regarded as the Trinity of modern Carnatic music. Tyagaraja composed thousands of devotional compositions, most in Telugu and in praise of Lord Rama, many of which remain popular today.[2] Of special mention are five of his compositions called the Pancharatna Kritis (English: “five gems”), which are often sung in programs in his honour.

There are rare temples of Shri. Thyagaraja and we are honoured to have born in a village “Injaram” where one such temple exist and build by family of “Mahindravada”.

Shri Thyagaraja Swamy has made several compositions and a note from wikipedia entry is here:

The term pancharatna in Sanskrit means five gems: The Pancharatnas are known as the five finest gems of Carnatic music. All the Pancharatnas are set to Adi Talam. So far as Pancharatnas are concerned, a stable text has been handed over by the earlier musicians to the present day. Several musicians have brought out editions of Pancharatnas. However, Veenai Sundaram Iyer’s edition is the most detailed and comprehensive. All the compositions of Tyagaraja show the way for the systematic development of the respective ragas. However, in the Pancharatnas, Tyagaraja has given full, exhaustive and complete treatment as to how to systematically and scientifically develop a raga. The two fundamental conditions that must be satisfied for a systematic development of a raga are the arrangement of the solfa swaras in the natural order of Arohanam and Avarohanam of the Ragas so as to satisfy the sound principles of harmony and continuity. Pancharatnas satisfy these scientific principles in an unparalleled manner. The Pancharatnas are composed in perfect sarvalaghu swaras.

The first pancharatna is Jagadaanandakaaraka, in the raga Nata. It is composed in lucid and poetic Sanskrit. It praises Lord Rama as the source of all joy in the universe. Originally there were only six charanams for the song and when the disciples examined the song it contained ninety names of Lord Rama in mellifluous Sanskrit. The disciples requested Tyagaraja to slightly expand the song by adding two charanas containing eighteen more names of Lord Rama. The saint acceded to the request of the disciples and that is the reason why the song Jagadaanandakaaraka contains two mudras containing the name of Tyagaraja while the other four songs contain only one mudra each.
The next is Duduku gala in the raga Gowla set to Aadi taalam. In this song, Tyagaraja takes the blame upon himself for all the misdeeds of men and ruminates on who would come and save him from this deplorable situation.
The third is Saadhinchene in the raga Aarabhi,set to Aadi taalam. In this song, Tyagaraja lovingly criticises Lord Krishna for his cleverness in getting what he wants to be done. Saadhinchene is a breathtaking lullaby.
The fourth song, Kana kana ruchiraa is in the raga Varaali set to Aadi taalam. In this song Tyagaraja describes the infinite beauty of Lord Rama.
The fifth pancharatna is Endaro Mahaanubhaavulu in Sri raaga. It is said that a great musician from Kerala, Shatkala Govinda Maaraar, visited Tygaraja and performed before him. Tyagaraja was enchanted with his performance and then was born Endaro Mahanubhavulu, the composition of unparallelled rhythmic beauty in Carnatic music.
Other notable compositions by Tyagaraja include Saamajavaragamana in Hindolam raagam, Aadamodigaladhe in Chaarukesi raagam, Raaju vedale in Hanumatodi raagam, Ninne nammi naanura in Todi raagam, and Nagumomu kanaleni in Aabheri raagam.

Today we keep adding a few collections of Shri. Thyagaraja and other great vocalists and music legendaries. Below is the playlist.